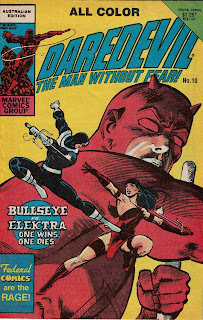 The publication dates for Federal Comics' Daredevil series match up precisely with those for The Mighty Thor - until the point they veer off on their own trajectories late in the piece. And of course, the exceptions prove instructive.

Fewer of my Daredevil issues have newsagency dates than The Mighty Thor issues, but the ones that do have dates line up uniformly. Further, the advertisements on the back covers match up, and indeed, these advertisements provide a reliable guide to the publication dates of Federal Comics issues of the period in general.

To this point they line up perfectly.

The Mighty Thor #9 and Daredevil #9 are the first colour issues in their respective series. They also have glossy covers, unlike subsequent colour editions which have a matte finish. The advertisements on the inner covers also match. I have dated these as being published October 1985. The Hanimax competition closes 29 November 1985. I have also previously owned a copy of The Mighty Thor #9 which had 12 written on the cover, which corroborates this evidence.

Daredevil #10 is also a colour issue, and it has a Funtastic Toy Offer advertisement on the rear cover. The offer expires 31 December 1985. There is no corresponding colour The Mighty Thor #10, but as you can see on my The Mighty Thor gallery, I noted a delay in publication for this issue and some degree of disorganisation or confusion regarding the format. Daredevil #10 and the Funtastic Toy Offer advertisement fill this gap for December 1985.

Daredevil #11 is the final issue of the series and is also a colour issue. This issue has the Madonna advertisement on the rear cover, as does the delayed The Mighty Thor #10, and #11, the final issue. I expect this dates Daredevil #11 February 1986, but it may be January 1985.

In reviewing these two titles I have also briefly checked my almost complete runs of The Amazing Spider-Man and Fantastic Four, and they also line up accordingly (with one exception which I will detail in a future post).

I will also post samples of the Federal advertisements in a separate post shortly.
Posted by spiros xenos at 2:49 PM