Speaking of evidence re: Yaffa publishing Marvel reprints in 1982, the newsagent's stamp on my copy of the digest-sized Ghost Rider #10 states MAY 1982: 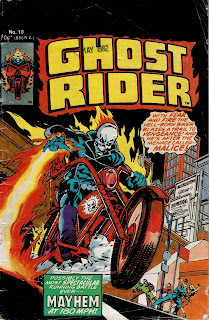 Presumably a sell-by date, this issue was likely published February/March 1982.

Further, the $0.75 cover price on the second King Conan digest-size issue has a 9 pencilled in the top left hand corner. If this is indeed a newsagent's mark, as it appears, designating a sell-by date of September, it suggests a publication date of July 1982, as Yaffa's digest-sized issues in 1981 had a $0.70 cover price, as does the Ghost Rider #10 above.

A further note - my impression is that the digest issues which ended the runs of various titles were taller than regular issues. The Ghost Rider issue above and the King Conan issue are both 21cm tall compared to the regular 19cm for digest-sized issues. It will take me some time to sort through all my taller digests to confirm any pattern eg. that the 21cm issues were all published late 1981 onwards, but it's another lead I'm following.
Posted by spiros xenos at 1:47 PM