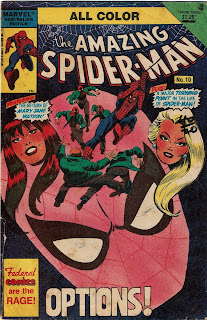 Federal Comics' The Amazing Spider-Man series differs from the other Federal Marvel series in two notable ways. Firstly, it doesn't have a bone fide #1 in the series, as it begins with Marvel Tales #1;, and secondly, the colour issues in the series begin much earlier than other series.

The Amazing Spider-Man was a 64-page, black and white bimonthly series as per the other Federal Marvel series, but beginning with #5 in February 1985 it converted to a 32-page "All Color" (sic)series. All the other Federal Marvel series converted to colour issues towards the end of 1985, typically for one or two issues (there are exceptions) before reverting to 64-page black and white editions with a cover price of $1.25. These colour issues had a glossy cover until #10 in December 1985. The final issue in the series was also a colour issue - this series did not revert to black and white.

To go back to #10 - I date this December 1985 based on the Funtastic Toy Offer advertisement on the rear cover.  My copy of #10 has 3 written on the cover. If these are bimonthly issues #10 would be dated January 1985, but I don't think this is the case - it's not plausible that the issue would be published after the expiry of the offer. It's possible - just very unlikely. But I'll be keeping an eye out for other copies of this issue for date markings. I also note that this early 1985 period has symptoms of some flux eg. format changes, so it's possible that issues were indeed published in a less orderly fashion than one was accustomed to from Federal. 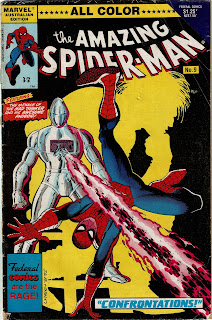 I said above the black and white issues in 1985 were $1.25. This cover price was effective from The Amazing Spider-Man #9, which also has the Hanimax advertisement on the rear cover. I date this from October 1985, but it may be from September 1985. TBC.
Posted by spiros xenos at 4:06 PM