[A] Macabre Joke and Double Murder in the [Rue] Morgue: Two translations in Australian reprint editions

I've often wondered about the Spanish horror material published in Gredown comics - how it was sourced, where the material originally appeared, how it was translated. I assumed the translations were done in association with the international distributor of the material. However, what I didn't realise is that multiple translations of the same material existed, and indeed that the variants were published in Australia. 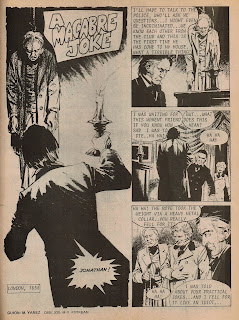 This story also appears in Gredown's Bite of the Vampire, retitled Macabre Joke: 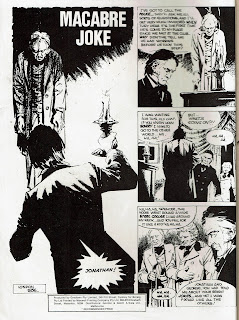 It is not only retitled but it is a different and, in many ways, a better translation - the expression is more fluent, and the font is more professional. And note the shape and positioning of the speech balloons are unaltered in the two versions.

Note also the club sign in the final panel of A Macabre Joke: 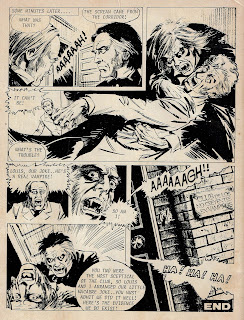 The Bite of the Vampire version has been translated: 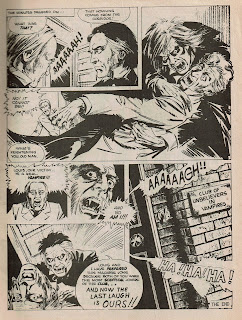 Unfortunately I have not been able to find traces of the original edition of this story.

However, I have found another instance of a pair of translations of the same story in Australian reprint editions.

Double Murder in the Morgue appeared in Gredown's Weird Tales of the Macabre #1, 1976: 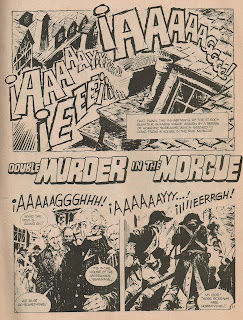 This was recycled by Gredown a few years later in Terror Tales Album: 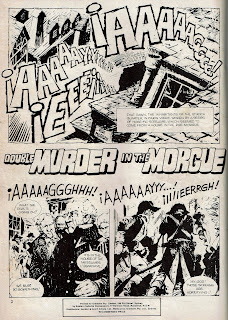 A different translation of this story appeared in Murray Comics' one-off Ghostly Haunts as Double Murder in the Rue Morgue: 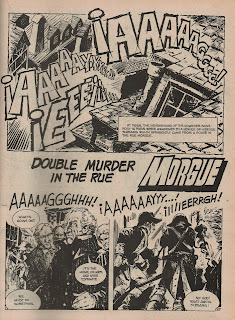 There is no editorial information on any of these three printings designating a writer, artist, translator or publishing origin, but it is clearly a story of Spanish origin, courtesy of the double exclamation marks. As per [A] Macabre Joke, the panel, text box and speech balloon shapes are unaltered.

There must be more of these multiple translations lurking in Australian reprints. The variable interpretations of the titles contributes to the difficulty in tracking the source material. I'd love to find out more about the sources and the translators.

It would be highly unusual for text box and speech balloon shapes to change as they would be integral on the supplied material (negative/positive or bromide). The only exception would be for a ‘different’ language such as Japanese where I’d suggest the supplied material would be without boxes balloons to accommodate top to bottom, right to left reading direction.

Interestingly, there was a poorly rendered ‘correction’ to the second “Macabre Joke” splash with the words “old chap” substituted for (presumably) “friend” or some other word/s.

Also, look at the last panel: “fooled” looks like a last-minute rough-as-guts fix.