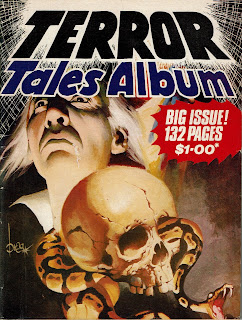 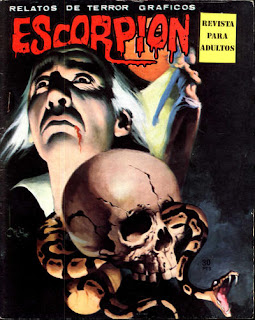 Note the blood on the lips of the vampire is skin-toned on the Gredown cover, and the semi-nude in the background is discreetly obscured. AusReprints identifies two other reprintings of this cover - the uncensored Geister-Krimi #53, and Le fils de Satan #6, which has a bet each way.

The attributions above are correct to the best of my knowledge, but it is difficult at times to distinguish between the reworked Eerie versions of stories and their pre-Code Farrell counterparts.

Double Murder in the Rue Morgue, Death in Advance and The Invisible Wall have been discussed before re: Murray's Ghostly Haunts.

As per Horror Tales Album, all of the stories in this bumper issue appear to have been recycled from earlier Gredown issues. Many of these stories previously appeared in Strange Experience #4 and The Devil's Triangle #4. I can confirm the previous printings for the vast majority, and expect to confirm the last few in the fullness of time. TBA.