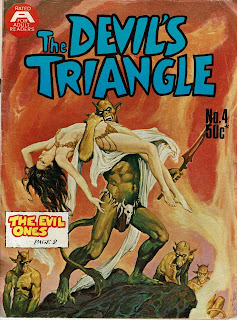 Shortly afterwards it came to the attention of someone earnest enough to be wearing a knitted cardigan: "On 29 August 1977, this issue and all subsequent issues of this series were banned in Western Australia under the Indecent Publications Act 1902-1974 (p. 3171, Government Gazette of Western Australia 1977/54 (2 September 1977)." AusReprints


What was so indecent? The title? The semi-nudes? The demonic figure? I'm not sure, but maybe Gredown tells us. Here's the first page of The Devil Statues: 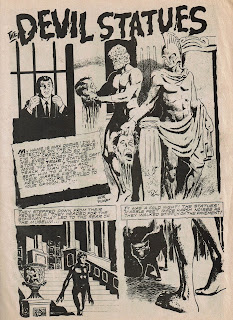 A year or two later Gredown reprinted this story in Shrouds of Mystery, by which time the statues were no longer holding bleeding heads, and Max Dorne had little reason to gape like an idiot at the statues: 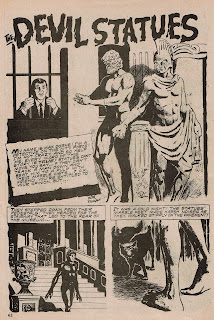 This version of the story was reprinted a few years later in Tombstone Terror.

Maybe The King of Hades was the offender. Here's a scan of the second page: 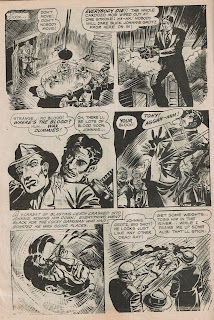 It was reprinted later in Terror Tales Album without the blood in the last two panels and no gunfire in the fourth panel: 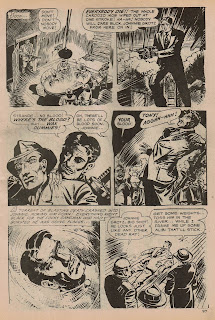 The Devil's Triangle #4 was Rated A for Adult Readers. Shrouds of Mystery, Tombstone Terror and Terror Tales Album carried no such advisories. Presumably Gredown self-censored, which was not unprecedented by Australian comics publishers.

The Devil's Triangle was not the only Gredown series to be banned - indeed, issues by Page Publications and Murray were also cited.

The series continued for another four issues with the Adult Readers rating. Shortly afterwards Gredown ceased publishing ongoing series in of favour single-issue titles. Maybe this is coincidental and other factors impacted this decision, but it's possible it was partly in response to the "all subsequent issues of this series" directive of the Indecent Publications Act.