Weird Tales of the Macabre #4 is another Gredown issue banned in Western Australia in 1977.

One of the stories in this issue is Dearest, Deadest Dummy, originally published in Farrell's Haunted Thrills #6 and reprinted a number of times in various Eerie magazines, and it's with one of these that  the Gredown print is no doubt associated.

This is page 6 of Dearest, Deadest Dummy: 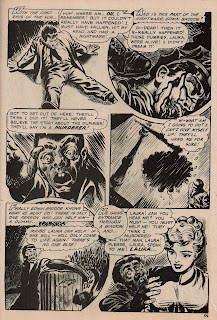 Presumably the gory blood on the policeman's head incensed the censor, because when Gredown reprinted the story in Pit of Evil #14, his face was as pure and white as one of the mannequins in the story: 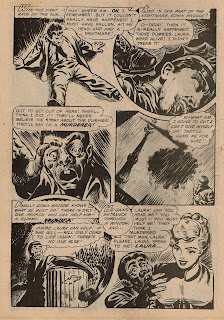 A few years later, after the ban was lifted on many Gredown titles, it was reprinted in The Underground: 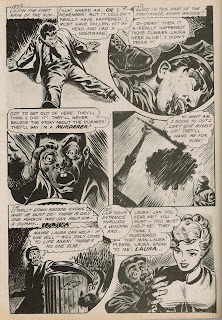 The blood was only partially restored, possibly by a tentative Gredown editor.

Of course, this may be associated with one of the Eerie reprints - years ago I read somewhere that Eerie editions often splashed extra dollops of blood in their reprints to satisfy the thirst of 70's readers, so it's possible the version in The Underground is an early Eerie print and the version in Weird Tales of the Macabre #4 is a latter 'extra sauce' version  -  but I don't have access to the various editions to check.

Update: Mark Cannon has confirmed the version in Weird Tales of the Macabre #4 is as per Weird v2#6 and Horror Tales v2#2.
Posted by spiros xenos at 9:28 AM

"Dummy" was drawn by Carl Burgos, who was an editor for Eerie Publications at the time. However, he's best known as the creator of the original Human Torch. The Torch was an android - and Burgess created or co-created at least three other robot / androids superheroes ; the Iron Skull (Centaur) and the White Streak (Target / Novelty) in the Golden Age and the _other_ 1960s Captain Marvel for Eerie Pubs publisher Myron Fass' short-lived colour comics line. Robots, androids, dummies - Burgos clearly had a thing for models of human beings!