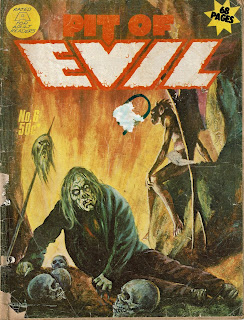 All of the stories in this issue originally appeared in Eerie magazines:

There is also a Contents page.

I can confirm that all but one of these stories were subsequently reprinted by Gredown - and I expect to confirm A Gift of Horror in due course.

As per The Devil's Triangle #4, Pit of Evil #6, and all subsequent issues in the series, were banned in Western Australia on 29 August 1977. It appears the offending piece was Shadow of Evil: 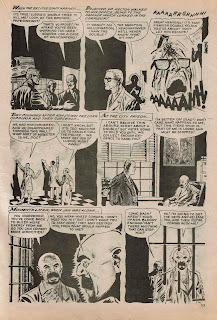 The blood in the third panel was wiped clean for its reprinting a few years later in Gredown's Reign of Terror: 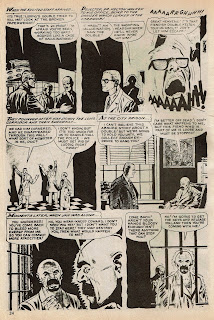 The ban was lifted on 26 June 1980. It would appear Reign of Terror was published before this date. This version of the story was also published in Forever Dead, which appears to have been published much later c.March 1985, according to the date stamp on the rear cover of a copy I recently came across


Reincarnation may also have offended the censor: 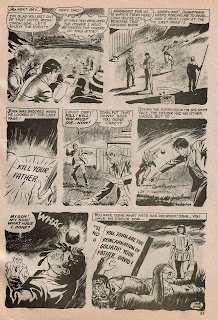 I expect the blood in the last two panels was deemed morally unpalatable despite the Adult rating on the cover. This story was reprinted in Horror in the Dungeon, and I'm keen to see a copy to check if this page was cleaned up by the editors.