The Incredible Hulk #3: The Newton edition


This is the cover to Newton Comics' The Incredible Hulk #3: 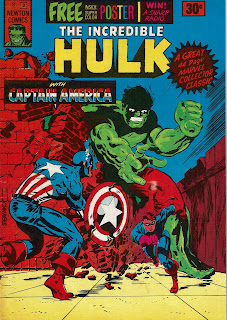 It originally appeared as the cover to Marvel Comics' Captain America #110: 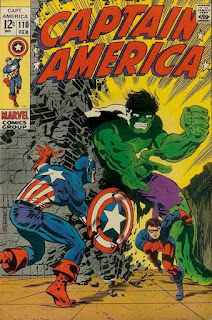 Captured at Last! is reprinted intact, apart from some minor cropping at the bottom of the splash page to accommodate the Newton Comics indicia. 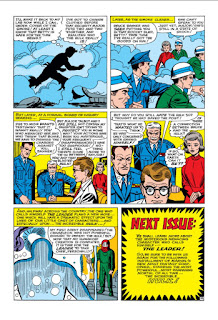 This is the final page as it appears in the Newton edition: 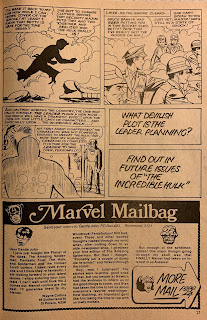 As you can see, it has been drastically modified. The second tier of panels from the original page has been omitted, and the original Next Issue blurb has been replaced by two Newtonese text boxes - all in the service of a partial Marvel Mailbag instalment. A rather bizarre editorial decision, and quite unlike anything Newton had done to this point.

But such radical surgery would continue in this issue. No Longer Alone! has been subjected to some of the most idiosyncratic editing in all of Newtondom.

Firstly, the splash page has been appended with a Captain America title banner across the top: 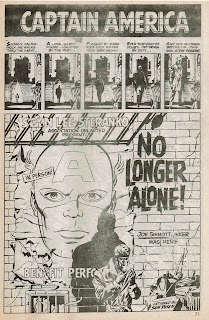 Compare to a scan of the original page as reprinted in Page Publications' Captain America #4: 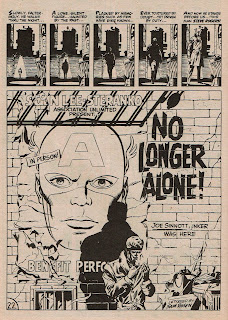 This is hardly an indictable offence in the circumstances.

However, consider page 11 of the story as it appears in Page Publications' Captain America #4: 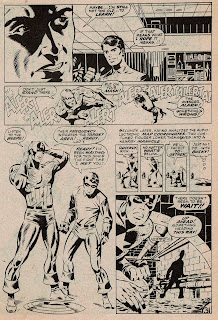 This is the same page in the Newton edition: 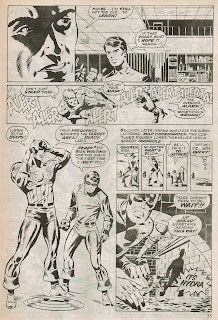 As you can see the exclamation It's Hydra has been inserted into the last panel. The rationale for this amendment is to maintain storyline continuity because Newton editorial omitted the following classic two-page spread revealing Hydra: 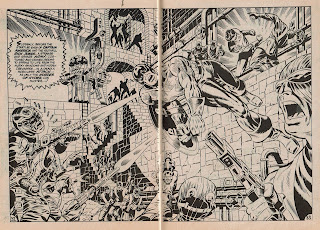 This scan is also from Page Publications' Captain America #4. So why did Newton decide to omit this key passage from the story? Because the buggers opted to make it the colour poster in this issue: 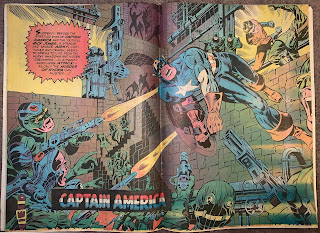 Depending on your perspective and predisposition, this is either a bonus, honouring a key Steranko set piece with prime real estate, or a travesty akin to adding lipstick to the Mona Lisa. Of course it's at least a little bit of both, but I'll just say at this juncture that if you are seeking narrative fidelity from Newton Comics, you are looking in the wrong place. It's the idiosyncracies of  this odd little comics publisher that fascinate collectors like myself, and rolling with the punches will help with the bruising.

This poster was also included in The Avengers #3.

There are no in-house advertisements for other Newton comics in this issue. A full letters page, a subscription page and a contest with the expiry date 8 September 1975 round out the issue.

I am not certain of the publication date. This issue would have been scheduled for publication 19 July 1975, but it appears to me it was published a week later 26 July 1975.

Thanks to Mark Muller for providing some of the scans and confirming the poster in this issue.
Posted by spiros xenos at 8:13 AM

Another great article and for the first time i never twigged that the Steranko poster was lifted from the actual storyline that was being reprinted then placed as the colour centrepiece. Enjoying these detailed issue by issue accounts.

Thanks Robert. I'd seen the poster version of this splash page before in another issue and when I saw the splash page was omitted from the story I had a perverse desire for it to be the missing poster in my copy. Confirming it was gratifying.

Circa February 1975… or maybe January… or even possibly November 1974. Time worked in mysterious ways at the Newton offices.

“Mr. Newton, sir, some of the production staff are worried about the changes we make to these Marvels comics stories. What if readers find out and are unhappy?”

Newton:
“Bah! Humbug! What? You think people care? It’s not as if anyone will even remember these damn rags in the future! I suppose you idiots reckon some fool will be analysing them in 40-45 years’ time.

Now get back out there and do whatever you need to do to make stories fit the page counts. And don’t forget to buy that primary school kid a new texta so he can finish off those next issue blurbs. If he complains just hand him another packet of sweets.”

Heh heh… Yeah, sounds about right... A bit like obsessing over The Beatles mono and stereo mixes... sometimes I curse, but mostly I'm grateful... It's the disease...