The cover to Horwitz Publications' Battle Action #68 is illustrated by Maurice Bramley: 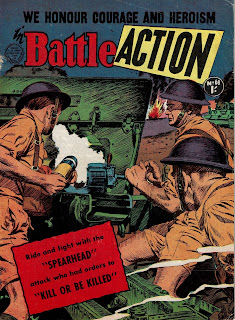 This issue reprints the four stories in Marvel's Battlefront #3. The four stories - Spearhead!, Kill Or Be Killed, Breaking Point and Follow-Up - are chapters of a single story, written by Don Rico and illustrated by Jerry Robinson, and told from the perspective of a tank.