Strange Stories From Another World #4: Fawcett in Murray Comics 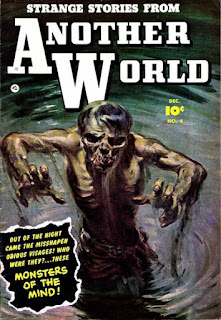 Strange Stories from Another World #4 is a classic Fawcett horror comic from 1952, and if you're chasing a copy you can expect to pay hundreds of dollars for a low grade copy, if a current eBay listing is any guide. Alternatively you can read it on www.comicbookplus.com.

Or, you can read the three comics stories in this issue across a few relatively cheap Australian Murray issues...

Pillar of Stone was reprinted twice by Murray. The first time was in 1973 in Climax Adventure Comic #12: 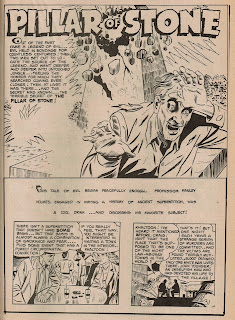 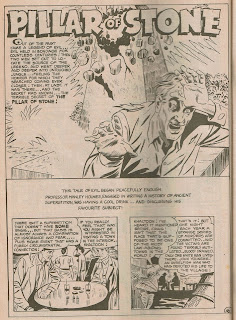 In each case this page has been reformatted, and unfortunately the ghostly figure in the original splash page has been 'lost in translation': 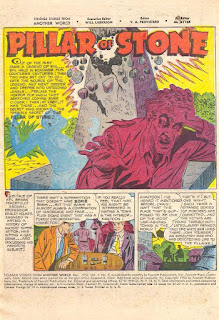 At least the printing in Climax Adventure Comic #12 maintains the original script font in the reformatted text box.

Monsters of the Mind was reprinted in Creepy Things: 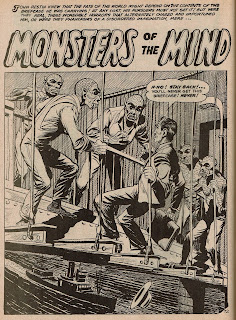 I love Bob McCarty's art - especially the faces of his hapless noir protagonists - and it is arguably better looking in black and white than in its original incarnation: 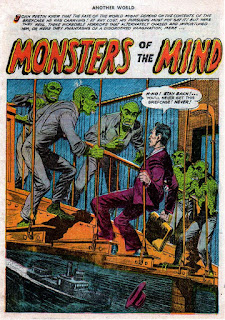 Phantom Riders in the Sky was reprinted in Doomsday #9: 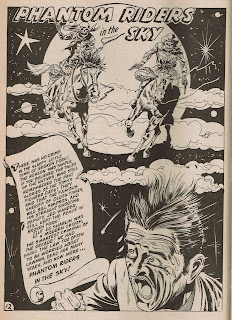 There's a definite appeal and charm to the pukey greens, yellows ,blues and pinks in the original, but again, one might argue this splash page presents better in black and white than in colour: 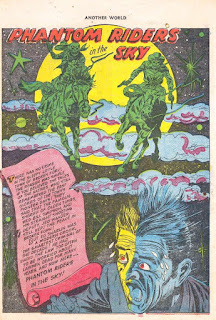 Sometimes we KGManiacs just have it good.

For its time the colour effect of the ‘ghost’ in a tint of the cyan (blue) plate was quite innovative and rare. I’d suggest Murray was only supplied Black plates (for the line work), so this would have been a mere oversight that - unless Murray’s prepress/graphic artist had a copy of the colour comic – made them blissfully unaware of the omission.

I have to say I’ve also read that story and also been ‘blissfully unaware’ of the missing artwork as well!