Tracking The Planet That Came To A Standstill! from Earth-Prime to Earth-Menzies


The Planet That Came To A Standstill was originally published in Mystery in Space #75. Here's a scan of the splash page from that issue: 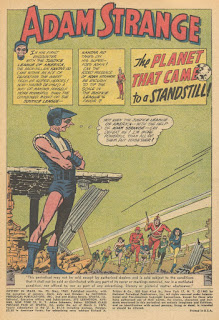 A year or so later this story was published by K.G. Murray in All Favourites Comic #37: 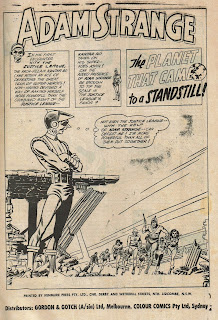 Note the first text box omits the reference to America. Presumably this is the Justice League of Earth-Menzies...

Also note the white space above the indicia. It's rather ironic that the erased text reads in part "This periodical may not be sold... or distributed with any part of its cover or markings removed, nor in a mutilated condition...".

This story was published again by K.G. Murray some years later in All Star Adventure Comic #80: 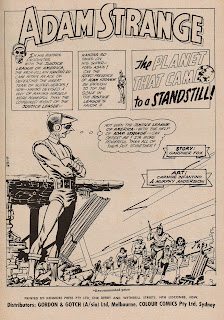 This version includes the job number and writer and artist credits, both of which are absent from the original page. These changes were instituted by DC in the reprint of the story in Strange Adventures #235: 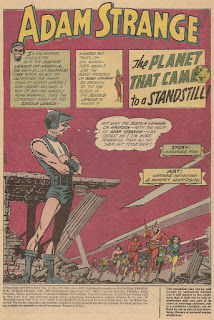 What wasn't immediately obvious to the reader of All Star Adventure Comic #80 is that DC opted to recolour this edition. However, keen observers would have recognised the remnants of the production staff notes to the left of Alannah, directing the new colour scheme.

This story was reprinted by Simon and Schuster in Mysteries in Space: The Best of DC Science Fiction Comics: 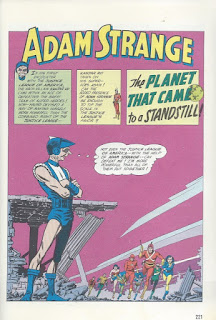 Note the writer and artist credits and job number from the reprint are omitted, however the new colour scheme has been maintained. As this was published under licence from DC it would appear this version was deemed canon in 1980 - albeit with slightly altered placement of elements in the frame. 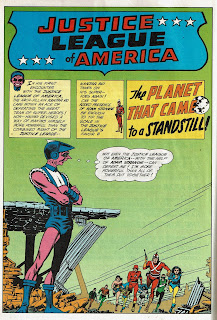 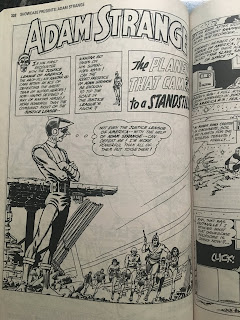 I have it on good authority that the version published in Showcase Presents: Justice League of America Volume One is not rebranded.

Here's a photo of the splash page in The Adam Strange Archives Volume 2: 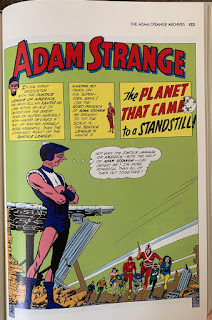 It appears the white space which afflicted All Favourites Comic #37 has returned, otherwise it is a faithfully cleaned up version of the original page.

The most recent DC reprint of this story that I am aware of is in Adam Strange: The Silver Age Omnibus but I do not have access to a copy of this book.  I wonder whether there is another variation of this story in this edition.

For an oft-reprinted award-winning story it certainly has been resistant to, shall we say, standing still.

And I haven't even mentioned the cover...!

Here's a scan of the cover of my copy of All Favourites Comic #37: 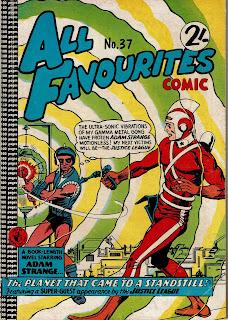 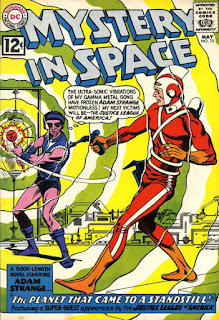 This is not the only cover for this story. Here's the cover to the All Star Adventure Comic #80: 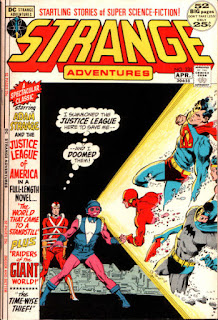 A new cover to this story was drafted for the aforementioned Justice League Super Spectacular: 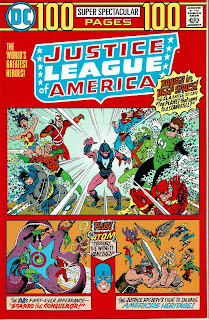 Not to be outdone by this wannabe, the original cover raises the stakes and makes a cameo appearance in DC Retroactive: JLA - The 70's #1: 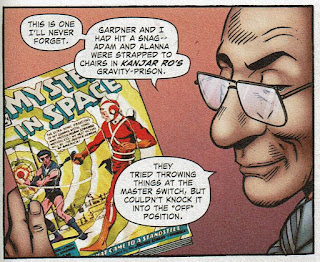 This is Julius Schwartz on Earth-Prime holding a copy of the original issue.

If you want to see a picture of me on Earth-Menzies holding a copy of All Favourites #37, all you have to do is buy me a beer. But it might lead me into bragging about how the arrival of this issue completed my run of 111 issues of All Favourites Comic.

Oh - if you don't believe Earth-Menzies is a thing...:

The logo above is courtesy of Mark Cannon, who also contributed many of the scans and photos above. Thanks also to Mark Muller for scans, photos and advice on the printing and colouring of the issues discussed.

Excellent, comprehensive survey of the printing history of this story, which I remember well from All Star Adventure Comic #80.